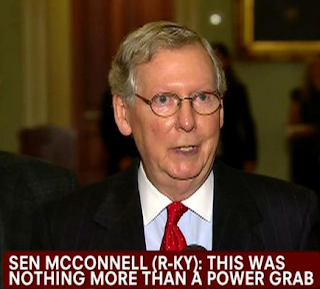 There are moments, events and speeches that turn tides, ignite fires and anoint leaders. Today might well have captured such a moment, event and speech. I have no idea how the next 18 months will unfold and weather someone like Ted Cruz could ever secure the GOP nomination or, having done so,  win enough electoral votes to become president of the United States of America. There are many obstacles in his way - probably the biggest is the absolute dread the deep pocket GOP establishment has of seeing a small "r" republican take the scepter from their hand and give it back to the people. But when I hear the phrase "the world's greatest deliberative body" this is what I think of and I wish there was a hell of a lot more of it. Commentators and talking heads will cluck, cluck about Senate decorum and rules, alienating his own caucus, "bomb throwing" (figuratively) and all the rest, but isn't this what Senators - real Senators - are supposed to do? It is a great 20 minutes full of truth, justice and the American way - Put a cape on Senator Cruz because today you were Superman.