The Heterogeneous-Threshold Model of Cyborg Pride 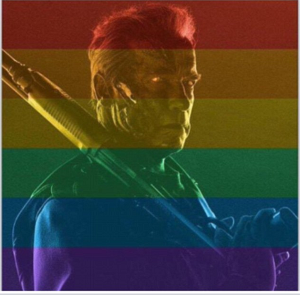 Last Saturday one of my buddies posted this on Facebook:


"My news feed is starting to look like a battle broke out between the Confederates and a skittles factory and I'm just sitting here waiting for the new Minions movie to come out."

It turns out that 26 Million Facebookers rainbowed their profile picture following the Supreme Courts ruling on gay weddings and that's a lot of people. It's only 4% of the 650 Million Facebook users, but that seems like the right percentage to me. I was wondering to myself what Big Data analytics the Palo Alto  gang might get from their rat lab and it sounds like they've been gathering a bunch of interesting data from those unwitting subjects. Pride, it has been observed, brings out the worst in us all and calling it gay doesn't make it any less sinful. 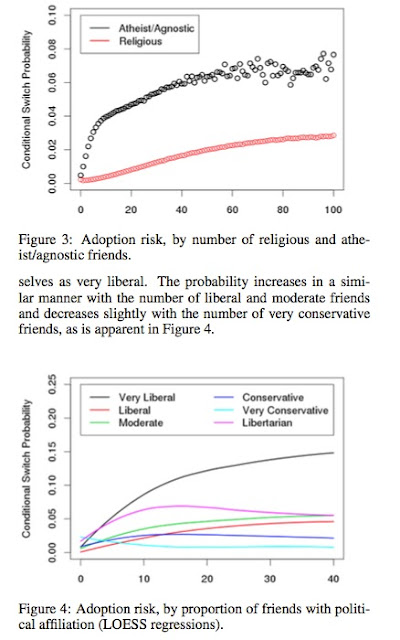 Back in 2013 Facebook ran an experiment with the Human Rights Campaign to see how many users would change their profile picture - to an = sign. Then some scientists at Facebook wrote a paper about it which says, in part:


"We show via simulation that the adoption curve is consistent with a heterogeneous-threshold model, in which the probability of adoption depends on both the number of friends and the susceptibility of the individual."

Yes, humans are confoundedly homophilous and it's an endlessly frustrating trait for social engineers the world over - even cyborgs must notice it (even if they don't really care). 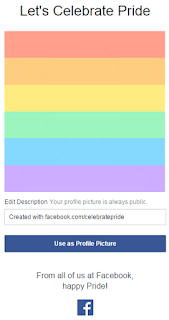 Celebrating pride is a bad idea. Pride is a destroyer of souls and blinds people to the truth in others and themselves. There is no human failing more dangerous and no quality more difficult to see in oneself than pride. I'm not saying we can go without it, we can't, because it's baked into the fabric of our being. Everyone takes pride in their work and family (or at least they should) and tempered with humility this is the natural state of man. But the celebration of pride leads to a narcissistic hellish existence of isolating homophilousness. There is a great deal of Southern pride rapped up in the Confederate flag but I didn't see Facebook create a special app to superimpose it's image over the profile pictures of it's members - It would have been an interesting social media experiment though. I wonder if the numbers of Confederate pride lab rats would have been higher than 4%? There is a lot of similarities between the Confederate flag and the Gay rainbow at a meta level so I'm sure the Heterogeneous-Threshold Model would have produced similar results - maybe not, but we'll never know. The similarities go well beyond anything Facebook can measure - to the heart of the Republic and what it stands for.

Jeff Lord explores this similarity in a thoughtful piece on the Dred Scotting of religious liberty and notes:

"Lincoln, was, famously, a lawyer and a good one. He revered the law. And up until the Dred Scott decision, issued by the Court months earlier in March of 1857, Lincoln was unhesitating in his support of judicial decisions. But deliberately, willfully inserting slavery into the Constitution — not based on the law but on the pro-slavery sentiments of the Court’s members, notably including Chief Justice Roger Taney — was a bridge too far for Lincoln."

I have sympathy for Roger Taney - people wring their hands about Supreme Court nominations in our day, but they should read a little history. Taney was born in 1777 so his entire life was spent in this independent nation and I have no doubt that he wanted it to survive and prosper - when the South seceded from the Union he stayed put as Chief Justice. In fact, he administered the presidential oath to the Great Emancipator. But in 1857 he just wanted the slavery problem to go away (are you reading this Justice Kennedy?) - bury it in the Constitution so the dogs stop fighting over that bone. Didn't happen - PRIDE.

PBS is going to rerun Ken Burns' Civil War documentary this September to rehash the whole sordid affair one more time. He plugged it on MSNBC - watch.


It is amazing - simply amazing that a person, obviously intelligent, who has studied the Civil War as deeply as Ken Burns has over decades could be so wrong in his analysis. The Civil War was the result of original sin (pride) but slavery itself was not "OUR original sin" - Slavery certainly wasn't considered a sin by most people when it first hit American shores but over time that view changed and the number of slave States at the start of the war was fewer than the non-slave States. "We the People" had voted to outlaw slavery as new States entered the Union and slave owners saw where this voting problem was going. More importantly, a surprisingly small percentage of Southerners actually owned slaves - want to guess what that percentage was? Just over 4%. Burns claims the Southern States seceded to preserve the institution of slavery, but it wasn't because the 95% of non-slave holding Southerners loved slavery. It was because they didn't know what to do with these slaves once they were free - It was similar to the illegal immigration issues of today but on some kind of super steroid. Those 95% were like, "what the hell, we didn't import, buy or breed 4 million black slaves, now you Yankees want us to make them full citizens?" No one, North or South, were too happy with what that 4% had done or any solution that was offered to mollify their pride.

Jefferson, at whom Burns takes a cheep shot, wrote that slavery was like having "a wolf by the ear" and he understood exactly what would happen if anyone let go - by wolf he was not referring to the African slaves. Claiming, as Burns does, that the Civil War is not yet over and still might be lost is preposterous as is linking the situation in Ferguson MO or Baltimore MD to the Antebellum South. It takes no account of the millions of Americans who emigrated to the USA post 1865 to say nothing of the additional millions who arrived post 1965. More distressingly, it makes no acknowledgement of the unbelievable efforts (and success) African Americans have made to integrate themselves into the political and social fabric of the United States.

Like other "liberal" scolds, Ken Burns loves to use PBS as a platform to tell America about OUR sins. To tell us OUR history as they see it. Slavery is not a sinful stain on the nations record - it was a practical solution to difficult problems faced by every per-industrialized society and it's still very popular in parts of our "modern" world. Millions more slaves were shipped to Latin America and the West Indies - Do they suffer from the "original sin" of slavery too? 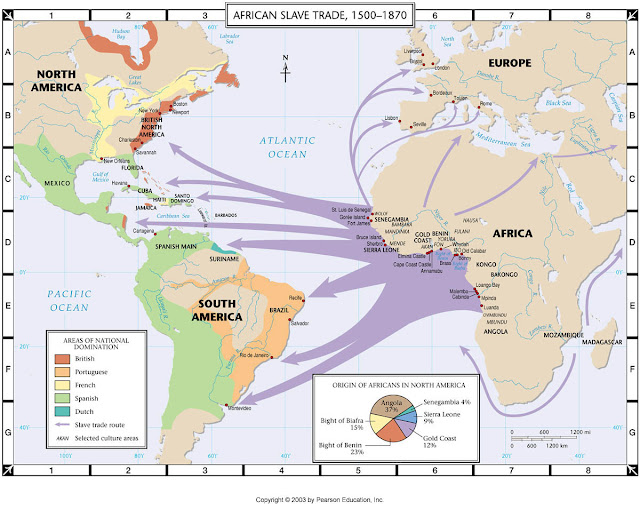 It was industrialization and modern "capitalism" that ended slavery and the information age that ended segregation - not moral virtue. Now we have machines that do the work that slaves once did and the better the machines become the more people demand that they take on human characteristics. People dream of cyborgs who will do their bidding, just like slavery but without the whippings - soon they'll be wanting to marry these human-like cyborgs - homophilous pride.
Pride is the original sin. That's true for every nation and every person. And the world will always humble pride (sometimes quickly, sometimes slowly) but Facebook, being an extension of the machine, will find that hard to model.