May 29, 2015
I salute The Soup - I honestly think it's one of the best programs on television. It's a television show about television that goes were few TV shows dare to tread. It's so subversive that were it broadcast on a "legitimate" network (ABC, NBC, CBS, PBS) or even a cable network that aspires to be taken seriously (CNN, ESPN, AMC, etc.) it would be vilified and protested by every group imaginable. It makes fun of everyone - movie stars, news anchors, politicians, poor people, fat people, yellow people, stupid people - the list is as long and varied as this wonderful country is big. I love it actually and can think of few ways better to squander an hour than watching Joel McHale bite the gigantic hand that feeds him.


You see, The Soup is broadcast on a goofy cable network called E! - a network so base and depraved that words can't capture the rottenness of its rot.  E! broadcasts some of the most horrific content imaginable and when my children ask me, "why do the terrorists want to kill us and destroy our country?" I always give the same answer - E! And E! is owned by NBC Universal which owns all kinds of entertainment properties. And NBC Universal is owned my Comcast which owns lots of stuff - including the Democrat Party. 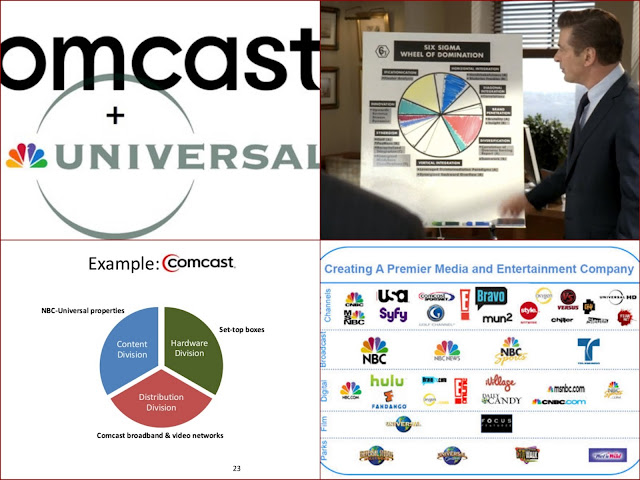 In the war on vertical integration there will be winners and losers and Comcast is determined to come out on top. The Federal government is trying to implement Net Neutrality of some kind using the regulatory powers of the FCC, but don't think for a minute that Comcast is going to have it's position threatened by these "reforms" - on the contrary, they'll probably be protected while their competition gets snuffed.


“The Internet has replaced the functions of the telephone,” Wheeler said during the commission vote. “The Internet is simply too important to allow broadband providers to be the ones making the rules.”

But who makes the rules for the ones making the rules? So if you, dear reader, invent a new technology for delivering broadband content now you know where your first stop is to get approval - FCC.gov - and that should spur your innovative juices in a big way. The economic pressures driving vertical integration of media and telecom services + devices are not going to change with an FCC ruling, but the requirement to go to the Government hat in hand (with an envelope of cash to be passed under the table) are being established. Thankfully we have The Soup to make us laugh and forget about the rottenness of it all.

If you want to know the truth - flip through the deck posted below.