"Kind of an odd way to make money" 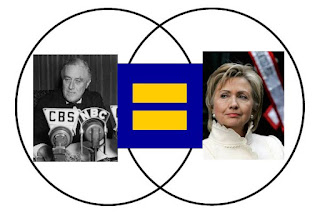 You might not believe it, but I'm telling the truth when I say that Eleanor Clift is a charming person and very pleasant to talk with at a DC cocktail party. Funny and engaging - not the screeching harpy she sometimes channels when battling it out with PJB and Mort Z on The McLaughlin Group - especially when defending the Clampetts. She's a HillBilly fan to the end so there's really nothing she will not excuse or justify in defense of their excesses - but she goes through the looking glass when comparing the Arkansas hayseeds to patrician FDR. Just a few points of consideration:
I love it when Democrat operatives talk about the "little people" because it gives away the game - and their ideology - in a way that no GOP talking point ever could. This view of "We the People" might be the one true point of intersection between FDR and HRC, but I don't want to be a little people. Do you?