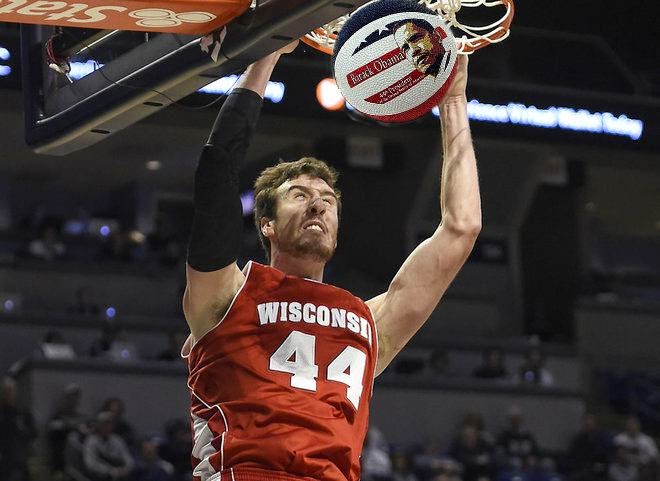 I wasn't going to say anything after last Saturday night's Wisconsin slap-down of UK - I was just going to let the shame of forfeiture pass silently into the black hole of Obama's history (like everything else). He had his shot at redemption and he blew it (again) and now he's only got one more Presidential March Madness Bracket to save himself with because nobody's going to care what he thinks about anything come March 2017. I'm not going to harp on Baracketology - it's been a disaster since the Sweet 16 and it only got worse over time ending in a complete mess (look for yourself if you can stomach it). PCT 39.5% - I mean, that's lower than his presidential approval rating. Among celebs the Prez ranks below Common but above Kermit the frog and, if you think about it, that sort of makes sense. BTW - I admire both Common and Kermit very much. 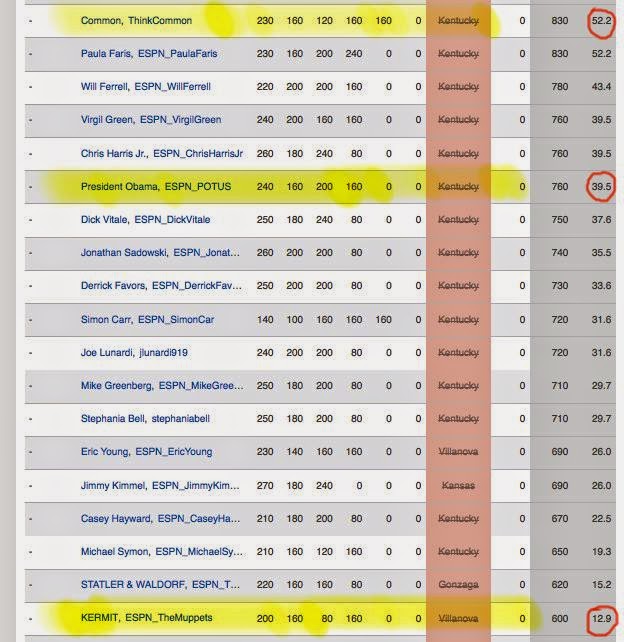 But there is one "celeb" that didn't make the ESPN list - a "celeb" that is "Ridiculously Good" at filling out his brackets - why it's ridiculous is a mystery that HuffPo does not fully illuminate, but the fact is that Wilbur smoked his brackets and lit BHO up.

99.98th percentile - IN YO' FACE America!!! In. Yo'. Face. Talk about magic underwear or whatever  but Bromneytology is off the hook. Even with this shocking news I still was tempted to ignore the Presidents failure out of respect for the office and focus on new brackets like the National Journals Republican Bracketolog. Devised by political genius Charlie Cook the GOP bracket is a little different than the NCAA hoops bracket, but it sort of maps to it:

Cook does his best to start filling out his bracket even though it's still spring training but he doesn't get too far and puts some candidates in the wrong division - oh well. It ends up looking like this: 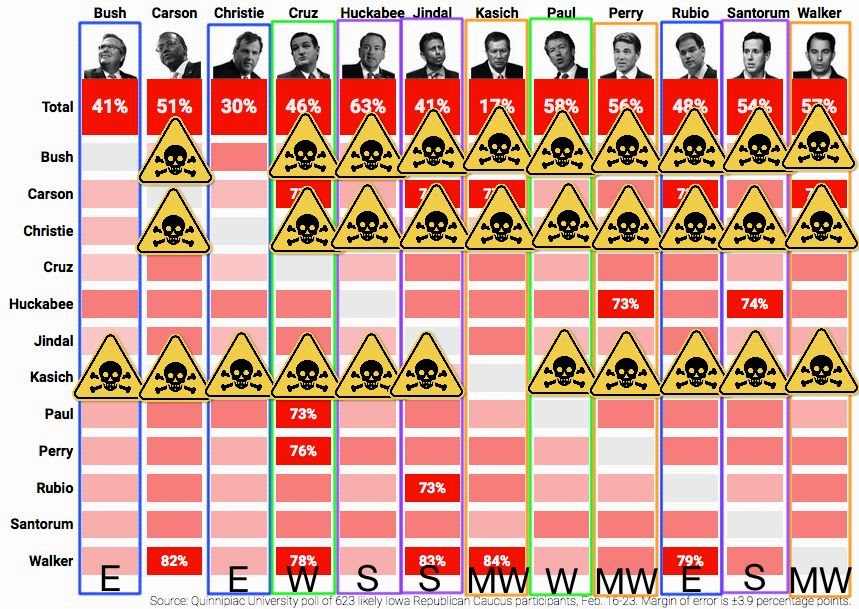 The NatJ's Scott Bland (yep, that's his name) tries to knee cap Scott Walker using this bracket by arguing that because Walker supporters in Iowa also like all the other GOP candidates there's a chance of defection and fissures in the Conventional Conservative camp - nice try Mr. Bland. What's left unsaid in the "analysis" is that Bush and Christie supporters don't like any of the other GOP candidates and Kasich supporters absolutely HATE everyone but the postman's son. It's insane - the nice Midwestern gentlefolk who back Walker support the GOP broadly (even Kasich) but odds are they're going to loose, while the "establishment" backers, who hate the base, are odds on favorites to win it all. All's going according to evil plan until...

Obama To Scott Walker: 'Bone Up On Foreign Policy'

Anyone who thinks President Obama will shy away from presidential politics in 2016, think again.
Obama scoffed at Republican Wisconsin Gov. Scott Walker's suggestion that he would, on Day 1, revoke any nuclear agreement with Iran if he is elected president.
"It would be a foolish approach to take," Obama said in an interview with NPR's Steve Inskeep, "and perhaps Mr. Walker — after he's taken some time to bone up on foreign policy — will feel the same way."

Fresh off his dismal March Madness performance, in an act of astonishing hubris FBPOTUS jumps right in and starts filling out his GOP Brackets prematurely. Surly this is great news for the Walker campaign and, natch, they shot back immediately, but they didn't have to say anything more than 39.5% - Wisconsin smashes Obama's bracket and all hope of redemption is lost.