The Garden Where The Praties Grow 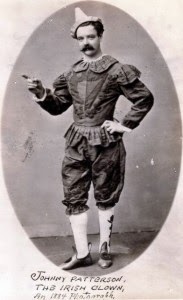 Celebrating St. Patty's day I call your attention to one of the great clowns of Irish history (and America) - the magnificent Johnny Patterson. A wonderful article written in The Independent by Collin Murphy points out some of the highlights and low-lights of his life. His fellow Irish clowns wrote and performed a play to honor his life and music but other than that he is mostly forgotten. But he is not forgotten here at the KOTCB blog - Here, we consider Johnny Patterson a true brother in our battle to pull humanity up from and out of the machine. Orphan, famine survivor, drummer, circus run-away, brilliant performer, brought to America to entertain the masses, overstayed his green card by 9 years, daughter killed by an elephant while he was in the States, returned to Ireland a wealthy drunkard, continued to perform for a circus that actually shot live ammo at it's audience - This is an Irishman of the old school. We have no visual record of his gifted clowning but we do have his music and the man who wrote this song is worthy of high honor and solemn remembrance.