March 13, 2015
For 20 years this bombastic gadfly has been barking into the homes of lazy American cable subscribers stupid enough to set their boob tube to his frequency. For the past few years (7 to be exact) he's been on a racist rant about President Obama and how Republicans EVERYWHERE can't cope with the melanin in BHO's skin - As thought the GOP gave a rat's ass what color a politician is (ever taken a close look at John Boener's skin color?) 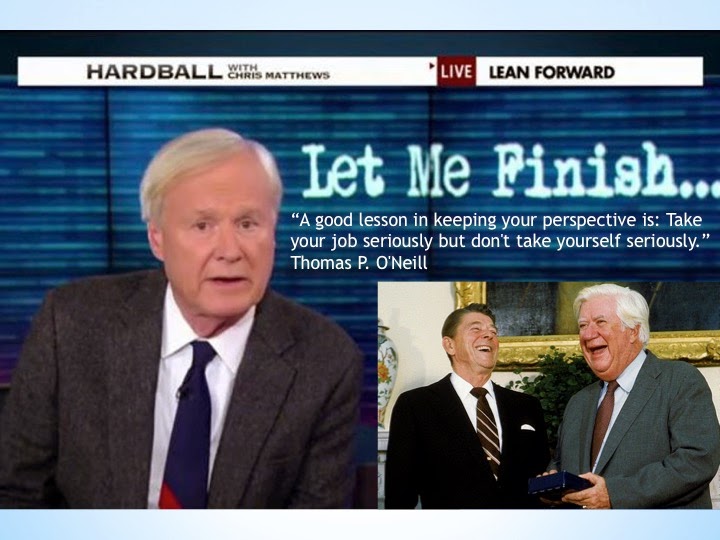 Last night Chris Matthews went off the rails again with his Hardball closer. Listing all the mean things conservatives have done to Obama over the past 6 years:
And then he finished with this doozy:


"They (future Americans) will read all this and wonder: what was it that made the Republican opposition so all-out contemptuous of an American president?  What made it treat him as below respect, below the dignity historically accorded his office?

They will look at the concerted effort of Republican legislative leaders in three dozen states to make it harder for minorities to vote, even claiming partisan victory when successful in the effort.

They will then look at a picture of this president and, perhaps, get the idea that the age of Jim Crow managed to find a new habitat in the early 21st century Republican Party."

Mathews should go to YouTube and watch some old Hardball clips - they're very clarifying even now and they certainly will be when people "look back" on this Presidency.


But OK, I'll play - why the contempt and lack of respect? And not just from Republicans, but from huge numbers of American voters in general. Chris Matthews should be able to answer this one himself, but he doesn't want to. The answer is that BHO was not ready to be President of the United States, but found himself elevated to that role because the Democrat Elders (Kennedy, Kerry, etc) were desperate to keep HRC from becoming President. Basically, he's an affirmative action hire and they're making the best of it while he's there - The Democrats have no one to blame but themselves (especially Chris "thrill up my leg" Matthews) for the slings and arrows Obama must put up with (just as the GOP would be to blame if Sarah Palin became President - does Matthews think the Dems would treat her with "the dignity historically accorded the office?"). Vote suppression is the least of the Dems worries and pinning broadly popular voter ID laws on the GOP is a lazy left race bating mistake, but as Kevin Williamson pointed out so eloquently it is just the kind of mistake they must make until they are finished.