March 23, 2015
Holy Shiite, I'm worried now - really worried. I don't know how the Prez is going to find redemption in this years March Madness Bracket competition after what happened over the weekend. Baracketology is shot all to hell and we're only at the sweet 16 - What if UK looses to the hillbillies from Morgantown? Cat Barber might be able to joke about it, but I can't believe anyone in America can be laughing at this point - I guest the nation still has a little hope that the West will save some of the president's dignity. 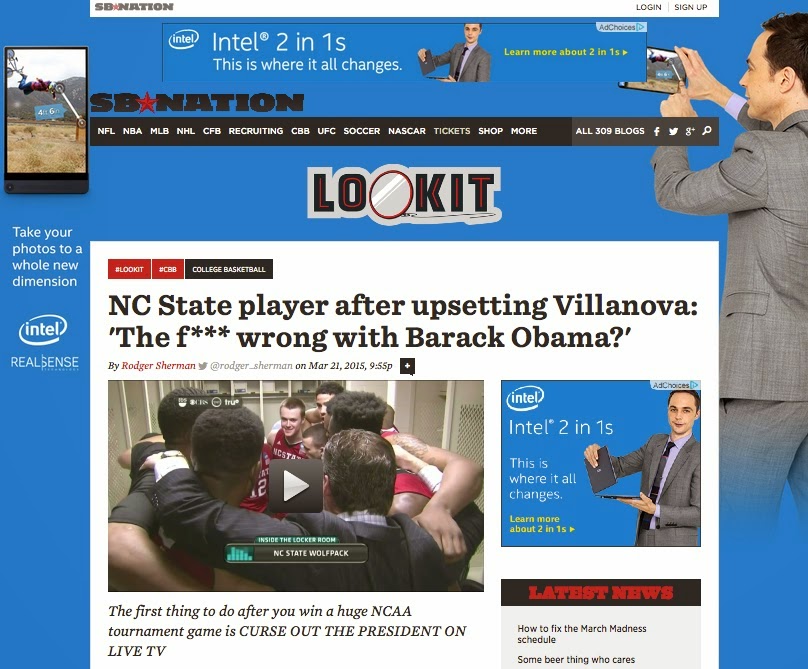 Even so, it's not good when a purple State basketball team is dis'n FBPOTUS as its first order of business after winning an extraordinary game against #1 seed Vanilla, er, Villanova or Nova as 0 likes to call them. Where's the customary respect for the office of the presidency? Is this the GOP Wolfpack or what?

Even more discouraging is the fact that SB Nation dot com would not even let BHO's defenders comment on this story - total interactive black out with zero comments and that's just wrong when the story's this big.

Maybe I should go to a web site that covers the expanding US mission to Iraq or the Afghan withdrawal or the Shiite advance in Yemen and see if anyone's commenting on this dangerous joking around.