February 22, 2015
The 87th is here and this year they've got a pretty good crop of movies to choose from. There's a unique symmetry to the choices and, weather by design or by accident, it makes for a fun competition (see below).

American Sniper - There are Wolves (al-Zarqawi), Sheep (Seth Rogan) and Sheepdogs (Chris Kyle) and fortunately the USA has A LOT of sheepdogs. Plenty has been written about this movie, but the "message" is crystallized in the eyes of young Chris when his Father, after giving the Sheepdog talk, asks him if he "finished it." Yes, he did.
Birdman - If you cross "Russian Arch" with "The Dresser" you'll realize "The Unexpected Virtue of Ignorance" which is a long way of saying that thespians are batshit birdshit crazy. Makes you wonder how any movie or play ever gets made.
Boyhood - "American Shotgun" this movie is Linklater's  bookend to Clint's sharp shooter tale. Shot in the same "matter of fact" no frills style, covering roughly the same time period this movie explores the cowardly, narcissistic side of Texas. Hard to believe that Navy SEALS fought and died to preserve this inverse/upside down version of America, but they did.
The Grand Budapest Hotel - Another original, meticulously detailed, dollhouse conjured by Wes Anderson and the usual crew + R. Fiennes. What can one say but that there's a lot of theater in the hospitality business and it's pretty darn funny in a disappointing way.
The Imitation Game - Computers are gay. You want to talk about imitation game how about Weinstein promoting this as a romance between Cummerbund and Knightley in the trailer?
Selma - I love how many "liberal" critics claim this story is 100% true except the portrayal of LBJ. Right. If Oprah really wanted this movie to take off she would have insisted that LBJ be portrayed as a gentleman and George Wallace a Republican, but she decided to tell the truth instead - so it will never win. Just like last years slave movie I'm still wondering why it takes British actors to tell this story?
The Theory of Everything - There's something creepy about Stephen Hawking with his steel wheels and computer voice telling everyone there is only science and nothing else - but this movie makes the unscientific proposition that everything, in theory, is about his ex-wife Jane.
Whiplash - Birdland!!! They loved it at Sundance and for good reason - it's great.

This years Awards gives me an excellent opportunity to score the Academy on their loyalty to America and I'll tally up the points* when it's over. Best Picture = 5, Best Director/Screenplay = 4, Best Actor/Actress = 3, Best Supporting Actor/Actress = 2, All the rest (DP, Costume, Music, etc) =1. 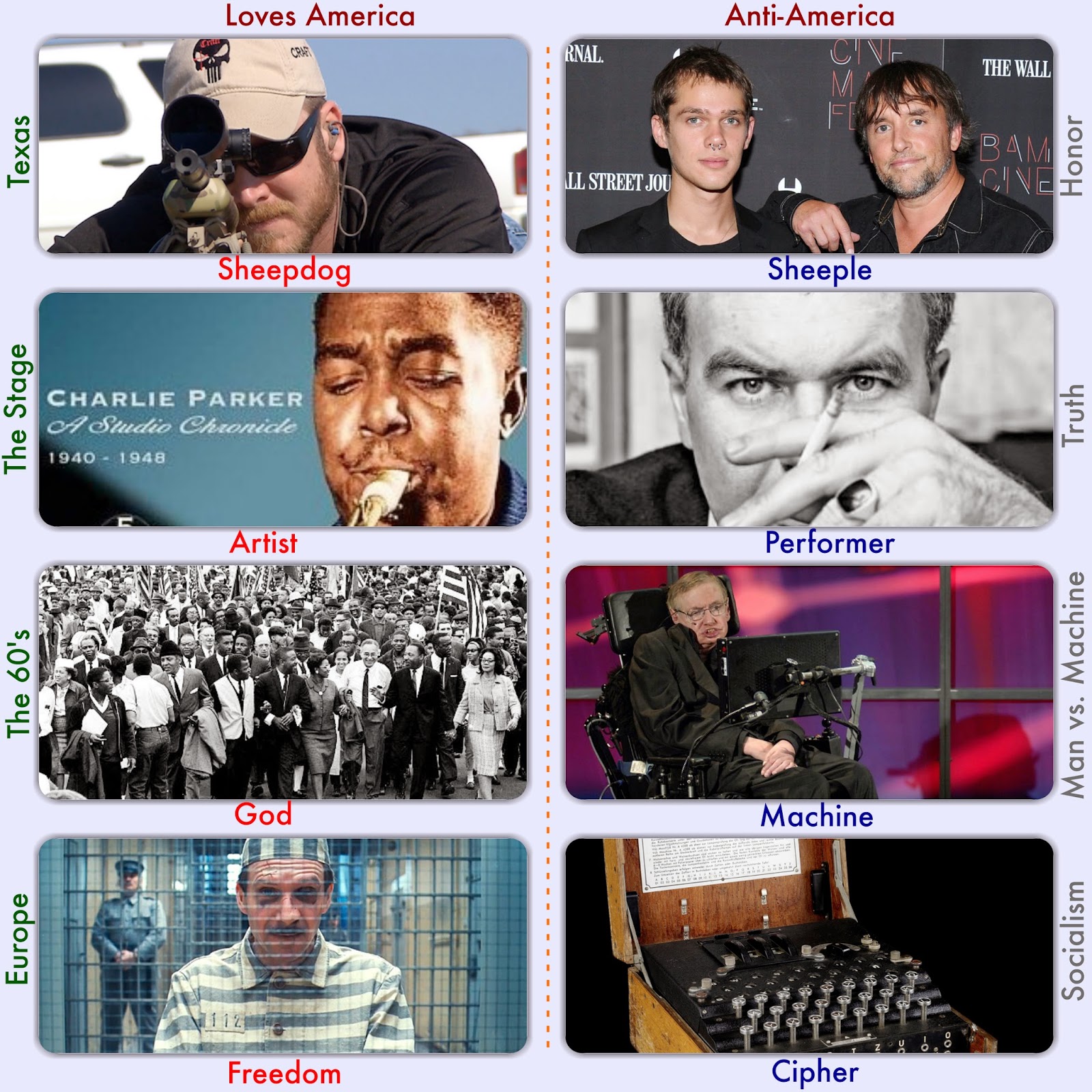 * The results are in - not a good night for the Loves America crowd but they were probably watching Netflix anyway so...

D.W.I. said…
Birdman has the best bit about critics I've ever seen. Made me feel better after a few 1 star reviews of my novel on Amazon. Birdman says to the critic, "You risk nothing." Amen to that. And those, all three of them, were some pretty good acceptance speeches. 1) blah blah. 2) Art is not a competition but an individual expression. 3) Mexicans, IN MEXICO, deserve an honest government. Face it: neither rich Mexicans nor poor Mexicans want to live there. The Mexican consumer is held hostage by the Mexican billionaire. (The Mexican billionaires ski in Deer Valley and go to the South of France every summer.) Everything costs more down there. They cross the border to buy tires and bluejeans and shampoo. The cops are corrupt. The politicians more so. It's a failed state. We can help by renegotiating NAFTA to open their markets to competition.

That being said what follows is not criticism but a personal reaction to the films I saw:

Birdman: A freaking tour-de-force in filmmaking. The long shots and dialogue are pretty specatacular. The ENDING SUCKS! That magical realism is a poison whether it's in a novel, short story or film. This is an insider's film. No wonder it won.

Boyhood: This might have been cursed by the kind words I had heard about it before I saw it. The movie left me a little depressed and angry -- it was 2.5 hours. I told the Squirrelle that the whole movie wasn't about the boy but about the mom. It was her drama that seemed to be the only story. The rest of it is treated in a weird cursory way. It is right that she won the Oscar. It was pretty much a documentary. Also IMPORTANT NOTE TO CASTING DIRECTORS: 2 blue eyed people cannot have a brown eyed child. Linklaters daughter COULD NOT HAVE BEEN THE CHILD OF HAWKE AND ARQUETTE. For an educated viewer it creates the subtext of illegitimacy.

The Jane Hawking Movie: It left me feeling empty and guilty. Guilty because I didn't want to bash a movie so well acted (dude deserved the win) about somebody that has overcome so much with a smirk on his face. It was really the smirk that got me. The SH Physics humor is brave and ironic in the face of his disability but not funny. Getting barraged with bad humor for 2 hours is not my idea of entertainment. God, I feel guilty just saying that.

I want to see Sniper and the gay decoder one too.
And, I really want to see Whiplash. I heard it's great. But I also heard that about Boyhood.
8:23 PM