Wrong Turns??? He was just following the map the NYTimes drew for him.

January 03, 2015
Walking into my local Starbucks (great name for a overpriced coffee chain BTW) I peered down at the newspaper rack to scan at the front pages of Saturdays fish wrapper and BOOM - NYTimes, front page, above the fold full column right hand side was a review of the sad life of one Ismaaiyl Brinsley - cop killer and suicide "victim" (he also shot his girlfriend {as the NYTimes describes her}). Click on the BOOM above and you can read the whole sorry news story, but here's the image that caught my eye and spurred my interest to learn more. 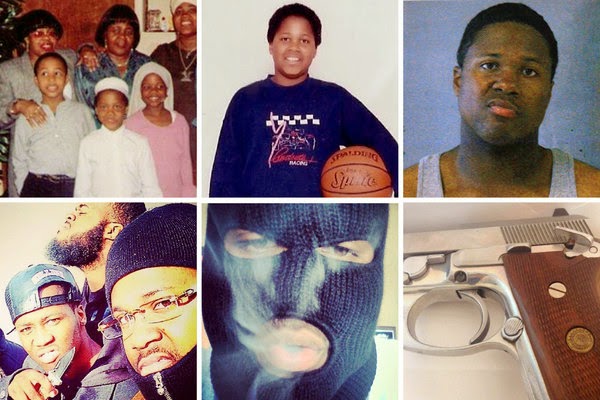 Pretty arresting composition, right? I have to say that, though I consider my own picture compositions a form a art I could not have done any better than this. It made me forget all about the $4.05 tall soy chai my wife sent me to Starbucks to pick up in the first place (BTW, not a misprint - a tall {which means small in Starbucks lingo} soy chai does cost $4.05 at my local strip mall). Not that I purchased the NYTimes - as I've said in previous KOTCB posts I stopped buying the paper in the Fall of 1994 - but I did call up the article on my iPhone while enjoying my daily constitutional when I got home. Now this blog is not devoted to the New York Times (though it could be) but it is devoted to clowns like Ismaaiyl Brinsley and their apologists which, in this example, happens to be KIM BARKER, MOSI SECRET and RICHARD FAUSSET who write for the NYTimes. Now, as with any story in the NYTimes, especially a front page story, one needs to read between the lines to understand what, exactly, the paper is trying to say. I think Newingsoc is trying to let the party and the Prols know that Ismaaiyl Brinsley did not murder two cops in Brooklyn, NY because of anything Newingsoc has been doing, saying or promoting over the past few months of racial strife and law enforcement scapegoating which has been highlighted, echoed and championed by some strange organic force that the NYTimes can't seem to identify and wouldn't really matter if they could with regards to this particular case of a young man taking many "wrong turns" in life.

It's confusing, I know, even though it's supposed to be illuminating so let me lend a hand and pull a few interesting sentences from the article to help you understand what Newingsoc needs you to understand:
(All bolding is mine to identify key points and explanations follow)
There's more, much more, but you get the idea. This poor bastard shot two cops in cold blood because he simply lost the plot. He didn't really know what he was doing and no one should blame the New York Times, Mayor De Blasio, Barack Obama, the civil rights organizations, the Occupy movement, rap music, Islam, the dissolution of marriage as an institution of stability or anything on the map that any of these entities have drawn - a map that Mr. Brinsley followed to his inglorious end.