January 24, 2015
I've always had a soft spot for Argentina. It's a magnificent nation with a vibrant, multi-ethnic culture, natural beauty and cowboys (Gauchos as they call them) and should be a natural ally of the United States. If not for one hundred years of ineptitude it certainly would be the South American cousin of USA prosperity. 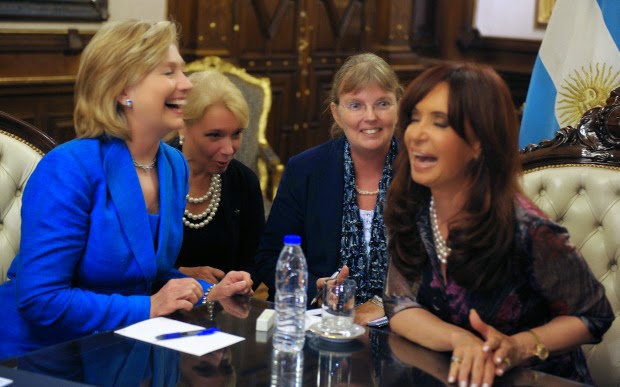 As it happens, Argentina also gives us a glimpse of the possible future of the USA with its loony President Cristina Fernandez de Kirchner - a lawyer, former State Senator, former first lady and, apparently, murderer. "Politics ain't bean bag" as they say, but the suicide(?) of prosecutor Alberto Nisman on the eve of his congressional testimony that would expose corruption in the Kirchner regime is just too weird - even for Argentina's Justicialist Party. And now CFK has jumped the shark with accusations of right-wing conspiracy and mysterious cabals plotting against her (sound familiar?). It's not like HRC doesn't have her own body count rumors but the question is do we want more? Look to Argentina Democrats! Think about it - think real hard.