Crisis of the prolate spheroid

I grabbed the image from this Smithsonian Mag article on how the "pigskin" evolved over 100 years of gridiron madness. As is obvious the early game was much different than it's current incarnation regardless of how advertisers spin it.

For over a week the sports press has been obsessed with deflategate and its impact on the "integrity of the game." You know, the game that's asked Katy Perry to perform at halftime of the Super Bowl which will have over $10,000,000,000 worth of bets wagered on the outcome (and every conceivable aspect of the game - total rushing yards, pass completions, number of fumbles, number of times Tom Brady head butts a teammate, etc). Yes, the integrity of the game has clout and must be preserved, but let's face it, even if the Patriots did purposely deflate footballs to win there is no way the NFL could find a culprit and punish them a week before the big game. Advertisers pay $4.5 million for 30 seconds and nobody's going to watch the Patriots play without Tom Brady so the ROI prohibits any punishment being meted out. It really comes down to basic economics, but there's more...

Many of these NFL players are doped just to play the game and for good reason - it hurts. Imagine if, every day before getting in your car to drive off to work, you ran at full speed into the side of your house. After a week or two of that you'd be popping Vicodin like jelly beans just to pull your pants on. How does this impact the "integrity of the game" that's oh so sacrosanct?

This is the NFL people! And as even Tom Terrific has admitted, "We’re not choirboys..." - You can say that again. In fact, one of the Patriots former stars is accused of murdering 5 people - shocking. 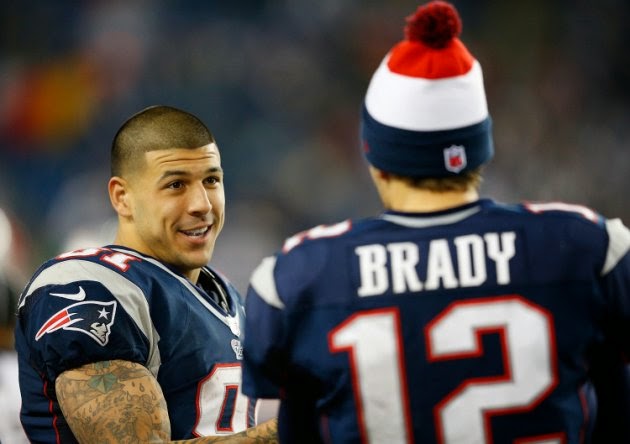 How do they get away with it, you might ask? Answer: because it's fun to watch - it's entertaining and entertainers get cut a lot of slack. Look no further than this years excruciating self reflection brought on by the Ray Rice scandal. Ray was a Baltimore Ravens running-back - a serious star adored by Tiny Town fans with their customary passion (which is extreme) - who dragged his unconscious girlfriend (now wife) out of an elevator so he got a 2 game suspension. No biggie, but wait they found video of him actually cold-cocking the girlfriend - she was bitching at him and he laid her out. All hell breaks loose, Ray gets suspended then fired and fans get subjected to this every game all season long:

How about Know More - know more about how the NFL, these players and the sports press establishment could see the video of Ray dragging is girlfriend out of an elevator and just say, "wow, that looks strange, but we really don't know what happened." After all, she might have slipped or banged her head putting on her makeup.

I honestly think the footage of Ray dragging his woman out of the elevator caveman style is more offensive than the hook he delivered in the elevator that knocked her out. If a man does smack a girl unconscious he should at least have the decency to carry her out of the elevator An Officer and a Gentleman style or wounded soldier style but this... where's the chivalry in hoisting your lady around like a sack of potatoes.

I can't get too worked up over deflategate and the damage it's done to the integrity of the game. The League executives, the players and the press are committed to keeping the carnival going and I'm planning to watch the show - bring on Super Bowl ExElEyeEx!!!