Contract on America (that never happened)

January 02, 2015
I don't, as a rule, speak ill of the dead but in the case of the Sfachime I'll make an exception. It was my joyous privilege to be living in New York in November 1994 to witness the political demise of Mario Cuomo at the hands of George Pataki. The look on Peter Jennings face when he announced the news, a look of crossed fear with shame, has been burned into my mind and (in moments of listlessness or depression) I can always recall it to lighten my mood. It was Cuomo and the glowing front page editorial masquerading as news that ran in the New York Times just before the election that finally pushed me to put pen to paper and cancel my subscription to that useless rag. As an aside, in that same paper on that same day, the NYTimes saw "fit to print" a disparaging "news story" on the GOP Contract with America - buried on page 23a (or something like that) deep, deep, deep in the paper - below the fold.

It was, of course, the CwithA that won election day 1994 for the GOP, sweeping out Tom Foley and the Dems and, ironically, turing the Clinton Presidency into an economic success. So thank you Mario! You liberated me from the New York Times, you never ran for President and you lost in 1994 giving me a lifetime of happy memories. 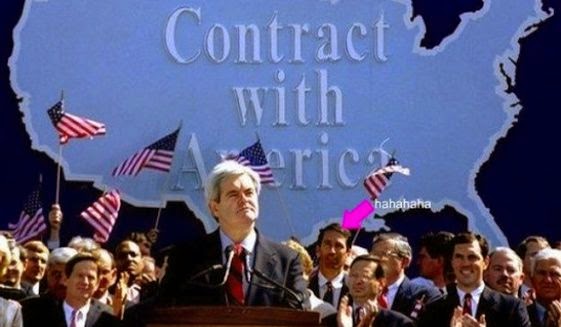