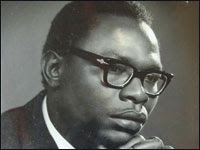 I have been dismayed to see the rise of B H Obama in the US national politics this past year, but I always figured that he was winning because so many Democrats simply wanted anyone but Hillary Clampett as their parties nominee for President. But reading the IBD report on Barack's Dad has me gasping for air and shaking my head once again at the stupidity of the Democratic party. How the hell do you nominate the son of an unrepentant Marxist to be your parties nominee for President of the United States of America?

I just don't understand what these people are thinking. It would be forgivable if the year were 1908 and none of this Marxist/Socialist nonsense had been implemented and tested on its hapless victims - but this is 2008 and we've had almost 100 years of experimenting with Marxist theory in real life governments and societies. The result is always the same - When fully implemented the destruction of civil society and emergence of a terror state or when partially implemented a low growth static society that looses it's will and sense of happiness. Why in God's name would we implement any of this ideology on ourselves or our loved ones? How could you possibly want a President who has been tainted or indoctrinated in the pathology of Marxism?