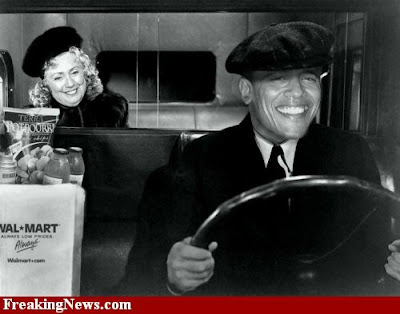 I have no sympathy for her... none. She is without a doubt one of the worst politicians (campaigners) I've ever seen and would be NOWHERE if it were not for the devilish talents of her flim-flam man "husband", who - all other things aside - it must be said, knows how to work a crowd.

The fact that she's getting her ass handed to her by a mulatto born in Hawaii, but now living in and representing her home state of Illinois is priceless. You see, Hilary is not from Arkansas or Washington DC and she's certainly not from New York - She's from the suburbs of Chicago and I hope after her Presidential bid collapses and she's left having to take orders from John McCain for the next 4 years that she will decide to finally throw in the towel and move back there.

It's not just that BO is a better campaigner (he is, and not just a little better either - he's so much better at it than she is that it's laughable) it's that she is left floundering because of her own ideology. She could have won this thing and Bill tried to show her the way (not by playing the "race card" like all the morons in the media keep saying) by getting to the right of Obama. I'm sure Obama's a very nice man, but he's a socialist tool who should be exposed for what he is - a teller of "fairy tails". That's what Bill Clinton called him and he's exactly right - the only problem is that Hilary likes to hear the fairy tails he tells, and she tells her own that are just as ludicrous.

Let's take an issue - Socialized Medical Coverage in the USA
Hilary could say "Hey, I tried that once and got beat back, I learned from my mistake and the plan the Sen. Obama has proposed is doomed to failure. We need a more nuanced approach to giving our citizens health care coverage."


Hilary could say "Sen. Obama is dead wrong, and has been wrong from the start about our war effort in Iraq. Many Democrats don't want to hear it, but the truth is that Sadam was a threat and had been a threat throughout my husbands administration. Sen. Obama might like getting shot at and threatened by a homicidal maniac, but it won't happen while I'm president."

I could go on and on, but the key is, she wouldn't have to adopt Republican positions, just give reasonable Democratic alternatives to our problems. But she's a big fat socialist just like Obama and so she's got nothing to say - she can't get to the left of him and her mind can't comprehend what it would be like to take positions to the right of him. Oh well, she's reaping the rewards of so many bad decisions in life that I just love to watch it all come apart and I can't wait for her concession speech after the Texas and Ohio primaries.