October 14, 2006
The collectivists in the USA love to talk about something called The Reality Based Media that sees the world as it really is, as opposed to the false way that so many stupid voters perceive their unreality. One of my favorite ways the RBM try to help the rubes who are brainwashed by Rush Limbaugh and Fox News is by creating Fake Presidents - i.e. Reality Based Presidents that should exists, but don't. The best of these many fake Presidents so far has been the sanctimonious scold President Josiah "Jed" Bartlet played by Martin Sheen on West Wing.

There's a new movie called the Death of a President where the current "real" President George Bush is assassinated and using special effects it looks really real. He's murdered by a black man angry that his son died senselessly in the Iraq theater of the War on Terror. But everyone in the US blames a Muslim man and he is scapegoated by the stupid people who don't live in Reality Based communities - like say, the independent Film Community in the UK.

Released yesterday, we have a film built upon the premise that someone like Bill Maher or Keith Olbermann could be elected President of the United States of America. Now that's funny? 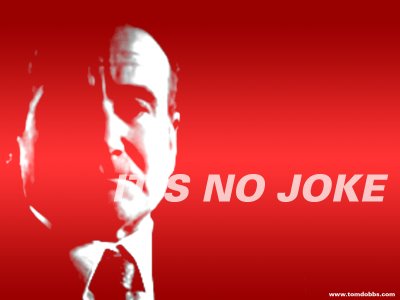 In 1992 Barry Levinson and Robin Williams teamed up to make a movie called Toys that ranks as one of the worst movies I've ever seen. In fact, I have not seen a movie, TV show or anything made by Barry Levinson since wasting 118 minutes digesting this fable of a mad general who takes over a toy factory and his idealistic nephew, a man named Leslie, who stops him. Well, the team of Levinson and Williams are back with what looks to be a tired satire of modern politics. The Trailer for the film Man of the Year and corresponding web site TomDobbs.com are a depressing reminder of how much the contemporary left hates democracy. I will not be wasting time or money supporting this juvenile meditation on contemporary politics but I will Ring the Clown Bell for Levinson/Williams.