A short fingered, no class, tyrant 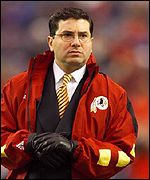 I make no apology for being a Washington Redskins fan - As I have said before they are one of the 3 great teams in NFL history - the others being the Green Bay Packers and the Cleveland Browns - but something has to be done about the current ownership. There is a breed of Redskin fan who's devotion to the team knows no bounds and no limits. They are simple minded and totally focused on the need to win at any cost and have little understanding and even less appreciation for the traditions that make the Redskins great. Danny Snyder is such a fan.

I give you three proof points.
1. Instituting the playing of lousy rock/rap music during time outs in the game (just like every other team)
2. Signing Deion Sanders to play for the Skins in 2000.
3. Inviting Tom Cruise to the home opener last Monday night.

This is a short list of many transgressions that are impacting the spirit of this great institution.