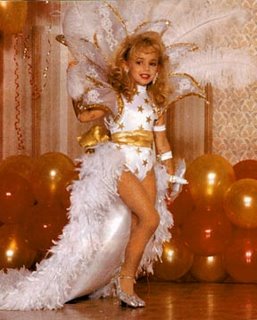 JonBenet is dead - she was murdered.
Her mother, Patsy, died from cancer this year.
Her father John, who allowed the little 6 year old to whore herself on stage to the delight of psychotic bitches and nefarious pedophiles who congregate around child beauty pageants, walks the earth a free man.
A "man" named Mark Karr claims that he killed the little girl so we hear about this case 24/7 (again) until the next big thing knocks it off the cable news stations.

Anyone who is fed up with this crap or just likes good cinema should go see a movie titled "Little Miss Sunshine" and contemplate its themes. Those people who are obsessed with this case should be forced - yes, I mean physically grabbed and strapped down in a chair and Clockwork Orange forced - to watch this magnificent film. Alan Arkin must win some kind of award for best supporting actor - he was terrific, as was the entire cast.