Confederacy of Dunces in a Big Sleazy Clown Parade

September 08, 2005
What to say about the vengeance that God has visited upon New Orleans over the past 10 days? Where to start? How about Maureen Dowd's column in the 09/07/05 NYTimes (I know that she is an unstable shrew who is deserving of her very own clown blog and the inanity of her writing is an embarrassment to journalists everywhere and the NYTimes editors should be arrested for continuing to let her make an absolute fool of herself week after week, but...) in which she came up with this doozy - " Later this week (no point rushing things) W. is dispatching Dick Cheney to the rancid lake that was a romantic city. " - too which I can only say, Maureen must never have stepped foot in New Orleans. Because the Big Easy was many things - a whore house, a dope infested crime zone, the most corrupt city in the most corrupt state in the union, a den of licentious misfits and "bad pennies" who loved booze and music, home to Anne Rice, the House of the Rising Sun, Peter Fonda and Dennis Hopper in Easy Rider - but it was NOT a "romantic city". New Orleans is the place where all the gutter balls end up as they fall off the big fat bowling lane of the Mississippi River. Every time I was in New Orleans I felt like I was in danger of getting shot or raped or both at any minute (and I was in the "romantic" sections of town).

Now let me say this one thing about Katrina - Anyone who has ever watched the Weather Channel knows that a Cat 5 hurricane is basically a sustained tornado - so if someone said to you "hey, there's 100% chance that a tornado is going to hit your house tomorrow (and stay there for 3-4 hours) and I think you should move" - would you? If the answer is no then you are a lot like the the City of New Orleans and you'll be gone 10,000 miles before the day is done.

Goodbye New Orleans - you were a lot of fun, but you were also very bad. 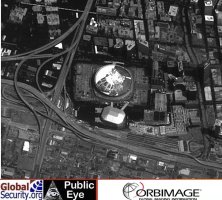 "Someday a real rain'll come and wash all this scum off the streets."