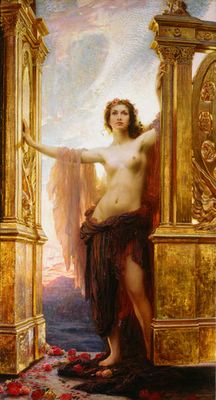 The Gates of Dawn by Herbert James Draper

October 06, 2021
Who voted for this guy? It's been ten days since the results of the Maricopa County, Arizona ballot audit were released to the public and presented at a hearing held by the state senate. This exercise in democratic accountability had been going on for months and, if reports are to be believed, was completed well over a  month before the September 24th hearing where   overwhelming proof of an illegitimate election was presented to lawmakers . The audit showed multiple irregularities, fake ballots, duplicate counts, errors, omissions and egregious acts of sabotage and obstinance by the Maricopa County board of supervisors who did everything they could to withhold and destroy evidence of wrongdoing from the citizen sleuths. The misfeasance of Arizona's political leaders was clearly defined, shocking and (for some) beyond belief but somehow these facts were discovered, organized, packaged and suppressed for MONTHS by the Cyber Ninjas who were attempting to "get to the bottom&q
1 comment
Read more

No Step On Snek

November 21, 2020
On The 2020 Election: In an elemental way We the People of the United States lost because Trump, and the MAGA movement he champions, forced the Deep State/Administrative State/New World Order (whatever you want to call it) and its enablers in Corporate America - Finance/FakeNews/Big Tech - to declare their sovereignty and steal our election in the most obvious way possible. The brazenness and " in yo face " shamelessness of the crime is a big part of its effectiveness and loudly proclaims an intent to demoralize and defeat the America First ideology which actually won the highest number of votes in this nation's history. It wasn't even close and that was made clear when key cities in 5 or 6 swing states declared they would pause (stop) counting(?!) votes until all the rural districts had submitted results allowing the big city machines to manufacture the ballots required to put Jo(((k)))e Biden in the lead. NPC's and Normies don't get too critical of process a
2 comments
Read more

September 08, 2016
She was "sexy", but "too much hard work." I'm a regular Fox & Friends viewer (mostly in protest of the other insipid morning programs like Today and Good Morning America) so over the years I've gotten to know Gretchen Carlson pretty well. Stuck between Steve and Brian she always seemed a prudish scold with an irritating, self-righteous demeanor that I simply put up with because I figured some people in the Fox audience actually liked her persona. It was obvious that Steve and Brian did not, but they were stuck with her like so many talking heads and had to make the best of it - which they did. Besides, she was no worse than any of the other women on morning show TV - I mean, you're only going to find a certain kind of person to do this kind of work and that kind of person is the Gretchen Carlson kind. Then, one day, she was gone and replaced by Elisabeth Hasselbeck and the F&F ratings began to climb, and climb and climb - in two months view
1 comment
Read more