January 05, 2005
What a lousy way to spend 5 hours on a Tuesday night. Clowns a plenty in this spectacle, but the half time show really made me wonder if I had woken up in a strange parallel universe that glorifies and worships everything that is wrong and evil in the world. How else can you explain the low quality of everything in the show - the sound was horrible, but the music was even worse and the clothing...Jesus...Topped off by a message that was so negative and self centered that I really just wanted to leave the country - scratch that. I wanted to leave the earth. Where is the Hiale-Bopp comet when you need it? Shaq, Mickey Mouse, Ashley Simpson... All so mediocre and ABC Television would use video of our troop in Iraq as bumpers to commercial breaks (some of the commercials were actually pretty funny) and I would think to myself - because I was alone - Are these brave men and women fighting in Iraq so that we can watch Ashley Simpson make a fool of herself to an audience of MILLIONS during the National championship Football game? 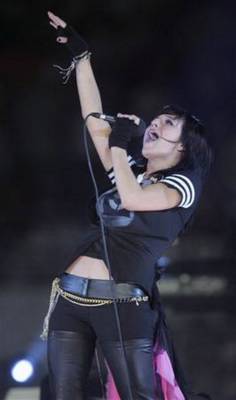 Absolute Crap from start to finish