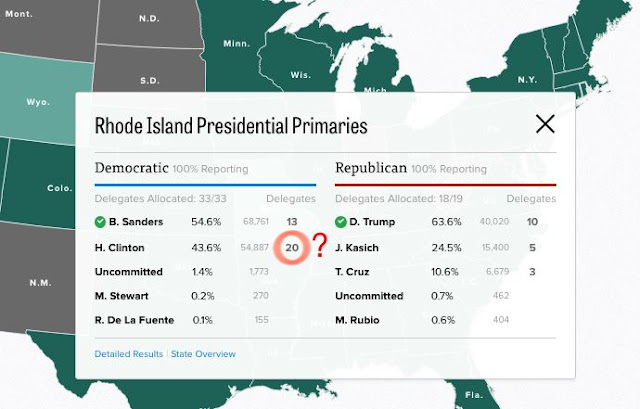 There are very few bellwether States in the Presidential primary process (at least as far as this blog is concerned) and one of them is the Biggest Little State in the Union filled with free-thinkers, misfits and crotchety old New England types who are about as provincial as it gets + assorted swells and drunken yachtsmen who congregate on the coast. Home to my favorite Hobgoblin is it any wonder that Mark Stewart tallied 270 Democrat votes (my kind of Democrat) in The Ocean State. Bernie won the Dem primary race in a landslide, as one would expect, but Hitlery walks away with the lion's share of delegates which only gives credence to DJT's suggestion that the constitutional monarchist should run for President as an Independent because he's getting treated like an obnoxious Brooklyn putz by his adopted party - cold shoulder and no respect. The Bern could join Ted Cruz who announced his quasi-independent bid for the Presidency today with running mate Carley Fiorina who explained it this way:


"Ted could not be more right in what he said: There is a lot at stake, and in fact, this is a fight, this is a fight for the soul of our party and the future of our nation," Fiorina said. "I've had tough fights all my life. Tough fights don't worry me a bit."

I know what you're saying - "Cruz can't run as an Independent because all the election filing deadlines have passed and he can't get on the ballot". But what if he goes to Cleveland, splits the party and runs as a Republican nominated by a subgroup of delegates that claim true GOP legitimacy. Under that scenario you'd have 2 Republican candidates on every ballot in November - It's happened before in US Presidential Elections. He's not fighting for the heart of the Republican Party but for its soul and that demands extraordinary measures. Those re-tweets of Heidi must have really gotten under Cruz's skin.

The Elvis from Queens cleaned up in a 5 state blowout last night but getting 64% of the vote in RI is incredible and, if you know Rhode Islanders, incomprehensible. If Trump can win the support of the freckle-faced economic illiterate masses in Warwick and Woonsocket maybe he can Make America Great Again. There seems to be nothing he can't do - why today he proposed overhauling US Foreign Policy to focus on America First. What a concept. Where does he come up with this stuff? 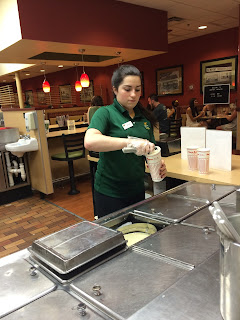 On the domestic front Mr. Trump plans to bring our jobs back and I hope he can because I travel to Rhode Island at least once a year and one of the highlights of my visit is dropping by the Newport Creamery for a delectable concoction the locals call an Awful Awful (Awful Big, Awful Good) - Ice Milk scooped up by real live human beings (yes, Rhode Islanders are human) and blended with sweet syrup and milk into a thick, icy paste that's sucked through a straw into ones mouth and down the throat to the stomach and what happens after that is anyones guess. These ice cream scooping jobs are stolen by machines (as are many other jobs) and it must be stopped. Who will step up and proclaim war against the machines that are taking our jobs and turning our youth into a drug addled, video game playing band of zombies who can't compete with the AI overlord influencing the desires - even influencing their simple whimsy. I want my ice cream prepared and served to me by a gender specific person with grubby fingers and germs gathered throughout her beautiful Rhode Island day spent polishing her nail, sharing a morning joint with friends, lunch on the beach, filling her car with gas, giving her boyfriend a hand job before work and doing her Newport Creamery duty. That's what I want. MAGA.