WoodStein continue to shock the nation - context is all

July 21, 2005
The most amazing feature of the U.S mass media is how it's leadership and decision makers are bound by the 1960's mind set and can't understand that the world has changed. Take for instance last weeks segment of Meet the Press where Bob WoodStein and Carl Bernward were dragged out one more time to discuss "Watergate" - this time in the context of protecting confidential sources. How foolish can two pompous blowhards be - here is the killer line from the interview -

"MR. RUSSERT: When Mr. Felt was sharing this information with Bob Woodward, and Bob Woodward with you, Carl Bernstein, you, early on, had a sense of just the bigness of it. And while getting a cup of coffee at a machine at The Washington Post, turned to Bob Woodward and said, "Oh, my God, Richard Nixon is going to be impeached."
MR. BERNSTEIN: That's right.
MR. RUSSERT: And Mr. Woodward said, "Don't ever say that in this newsroom."
MR. BERNSTEIN: That's correct. And the reason is that context is all. It's not just the individual facts. Just as context is all in the Karl Rove case. It's not just about Karl Rove. It's about WMD. It's about the truthfulness of the White House. And in Watergate, we were able to get this context very early because not originally Deep Throat but rather the bookkeeper for the committee for the re-election of the president, some other sources that Bob and I had, and Mark Felt all described to us this incredible "switchblade atmosphere" in the White House...
MR. WOODWARD: Yeah.
MR. BERNSTEIN: ...and that context told us Watergate wasn't just about a break-in. It was about a mentality."

That's right - it's about a mentality alright. One of the most destructive mentalities on the planet is that of the "modern journalist" who's false objectivity is used as a shield to lie and deceive the public to achieve political ends. This is the true legacy of Woodstein- insufferable hacks presented as courageous news hounds and getting filthy rich in the process. 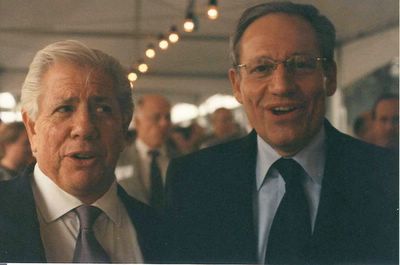 Woollyman said…
While the Woodstein creature's fifteen minutes have long ago expired, here the fetid fusion is spot on about not sabotaging the full discovery of context. We would be fortunate to find out that the current context is as
"innocent" as simple Nixonian, megalomaniacal desperation. In the abstract, the only meaningful difference between today's world and that of the Laugh-in era is that, in the interim, the right - with its ludicrous knack for situational morality - has determined for us all that extra-marital sex is more heinous than thievery, murder, and treason. God help America.
If it's time for single-minded dead wood to go away, let's toss in Negroponte, Wolfowitz, Abrams, Rumsfeld, and Cheney. And without them, the mirage that is "W" would simply, and mercifully, vanish. Clang the bell and paint a smile on Uncle Sam; we are all clowns unless and until we dismantle the Neo-con crime cabal.
I broke one bell already over that party favor, Gannon/Guckert. Geez these guys are incompetent freaks! Too bad they're dangerous, or I'd be laughing my #@@ off daily.
1:47 AM